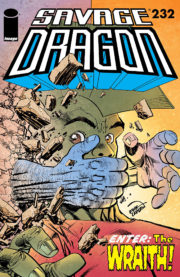 In case you guys missed it, we have the official solicitation text for Savage Dragon #232.

“TERROR IN TORONTO!”
Enter: the Wraith! He can walk through walls! Nothing can hold him! Nothing can stop him! And only one man dares to try: Malcolm Dragon!

I don’t think we had a character with the superpower to walk through walls before but it reminds me of the time Glum saved Angel with that device that made people intangible. A no-prize to the first person who tells me which issue that was in…