Erik created the Dragon as a kid, heavily influenced by characters such as Captain Marvel, Batman and Speed Racer. For years he drew and stapled his own comics just for himself until the character finally saw his first public appearance in the self-published Graphic Fantasy #1 in June 1982. 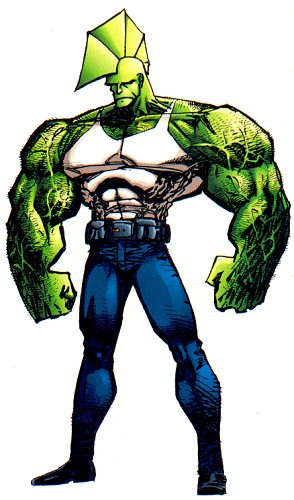 In 1986 the slightly revised character returned as “Savage Dragon” in the pages of Gary Carlson’s Megaton #3.

When Erik Larsen left Marvel Comics in 1992 to become co-founder of Image Comics he published a three-issue mini-series featuring his redesigned childhood creation the Dragon. Based on the huge success, Larsen released the ongoing title in 1993 and has worked on it as writer, penciller and inker ever since (sometimes even coloring and lettering). The book is largely considered the longest running full-color comic book that has featured a single writer and artist.

The Dragon is a large, humanoid character with green skin and a disproportionately large upper body and arms. He has fangs, two toes on each foot and a fin on his head. He has immense strength and healing abilities, is an expert marksman and speaks various languages.

Found naked in a burning field in Chicago by Lt. Frank Darling, with no memories of his past, Dragon joins the Chicago Police Departement to fight the Vicious Circle – a gang of superpowered criminals – and their leader Overlord. 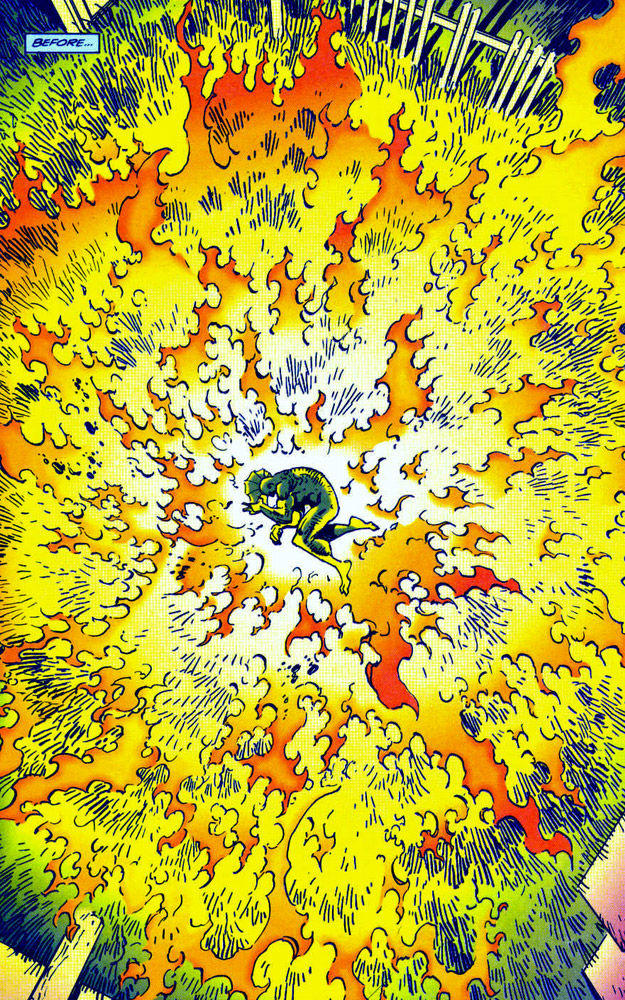 Dragon immediately makes a name for himself – both among his colleagues and his enemies. He asks for more superpowered heroes to assist him in his fight which leads to the formation of a team called Freak Force. Although they soon leave the police, they become allies in Dragon’s fight against Chicago’s criminals.

Freak Force member Rapture gives birth to Dragon’s baby, but the kid is dead at birth and the relationship breaks up. Dragon is forced to leave the Police and for a while, he works as a bounty hunter. Then he becomes a member of Special Operations Strikeforce – a team of superpowered heroes. In a fight with DarkLord, a time-travelling despot his former lover Rapture is killed.

Dragon starts a relationship with S.O.S. member Jennifer Murphy (a.k.a. Smasher) but she is brutally murdered on the day of their marriage. For a while, Dragon leaves Special Operations Strikeforce and raises Jennifer’s daughter Angel by himself. As he rejoins the S.O.S. and faces DarkLord again, he learns that the villain is the leader of the Covenant of the Sword – a shadowy organization that is holding his long-believed son and wife – both having secretly been taken and replaced by duplicates. In the battle with DarkLord, Smasher tragically dies yet again. Dragon kills Darklord, but upon his death, the despot uses his immense telepathic powers to transfer Dragon’s mind into the Dragon from another reality…

Dragon awakes in an apocalyptic world he doesn’t understand – hunted by that worlds ruthless leader Cyberface. For a long time, Dragon travels all over the planet in his search for allies until he’s finally able to end the mad world-leaders reign.

Dragon finds a way to return to his old reality but realizes he no longer belongs there. Upon his return to his new home, he battles and barely defeats Universo – the Devourer of Worlds. Dragon’s original world – now without Dragon to save it – is utterly destroyed. Just on the brink of destruction of the entire planet Dragon’s son Malcolm and Smasher’s daughter Angel (among a few others) manage to escape to Dimension-X.

Dragon meets the Jennifer (and her daughter) from his new world and although they are from different realities, they become a couple again. They get married and for a while, things look up. They get an additional family member in the person of Ba-Goom, a little alien dictator from Dimension-X who’s out to kill Dragon and conquer earth. Angel accidentally broke his teleportation device and Dragon doesn’t realize the threat he poses and so he stays with the family and becomes friends with Angel who calls him “Mister Glum”.

When Glum gives Angel a serum that blows her up to gigantic proportions she accidentally destroys the families home and breaks her mother’s back. Paralysed and looking for a way to get her powers back Jennifer vanishes from the hospital without any explanation.

Glum gets his hands on a device called the God Gun and uses it to actually conquer earth. He enslaves humanity but fails at killing Dragon. The hero is eventually able to defeat Ba-Goom by destroying the God Gun. Glum flees back to Dimension-X, accompanied by Angel who realizes she killed her own mother while being brainwashed under the command of Glum.

And then Dragon dies. In a battle with Virus, a monster he accidentally helped create, Dragon is killed and his brain is consumed. When Dragon’s son Malcolm gives a blood transfusion to Dragon’s remains his father is actually restored to life but he is not his former self… 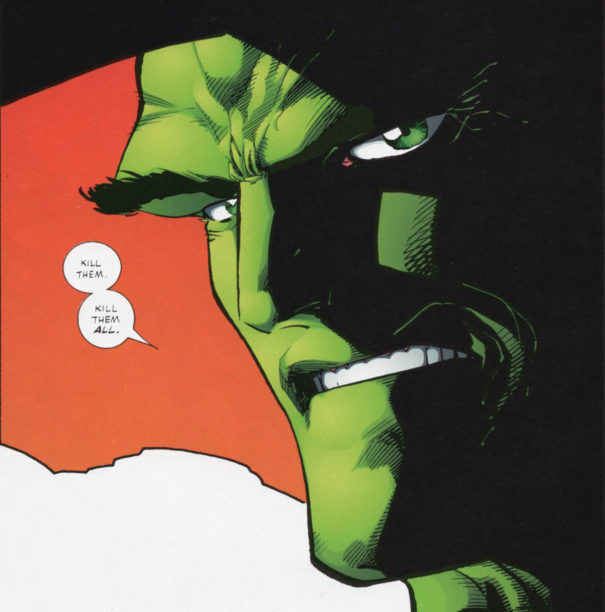 Erik Larsen had originally planned to never tell the origin of Savage Dragon, but when Image released a hardcover book celebrating its 10th anniversary he included the origin of the Dragon as his contribution.

Dragon is actually the ruthless Emperor Kurr, leader of the alien race of the “Krylans” looking for a new home planet. He is the chosen one, imbued with special powers and abilities. When they discover Earth, Kurr plans to eradicate all of humanity to make the planet theirs. Two Krylan scientists rebelled against Kurr, deleted his memories by destroying his brain and transported him to earth. Kurr is discovered in the burning field in Chicago and becomes the Dragon…

When Malcolm revives his dad the hero reverts to his former self and becomes Emperor Kurr again. For a while, he hides his true agenda but in reality, he picked up his old plans. He gathers the technology he needs, contacts the Krylans to return to earth and finally, he wipes out all of humanity and kills Malcolm and Angel.

Virus, the monster responsible for Dragon’s death, witnessed the killing of Malcolm and Angel. Dragons mind, which has survived inside the monster takes control of the body and kills Kurr.

Then DarkLord stepped in…

Using the corpse of Kurr and the brain of Virus DarkLord and the Krylans restore Dragon to his former self. DarkLord lets Dragon time-travel into the past to kill Kurr before he can execute his genocide. After that Dragon reclaims leadership of the Krylans.

Once Dragon found a suitable planet for his people he returns to earth upon which he is taken into custody for the crimes he committed as Kurr. He is found guilty and sentenced to death. He spends years in jail, having to defend himself against the law and superpowered inmates. Lorella, a Krylan, informs Dragon that almost their entire race has been killed off on their new home-planet by the hostile Tyrraneans.

Lorella comes to earth to produce offspring with Dragon to prevent their race from extinction. Using a device she helps turn Dragon from the Chosen One into a regular, powerless Krylan. 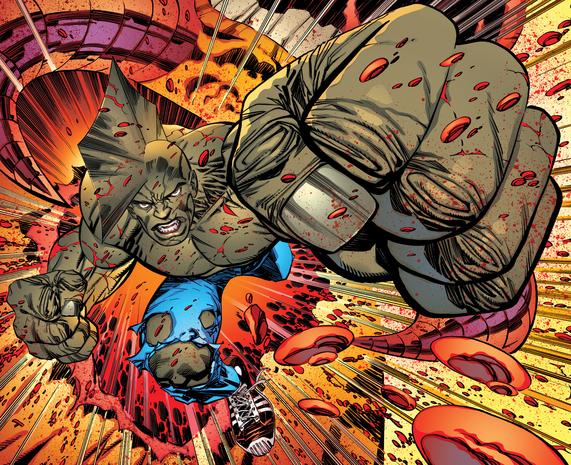 Malcolm is the child of Dragon and Rapture. He was believed to be a stillbirth, but he had simply been replaced with a dead duplicate by DarkLords organization the Covenant of the Sword. As the child of a “Chosen One”, he got his father’s immense strength and healing abilities and additionally, he inherited lightning powers from his mother.

For years he was raised by an alternate version of Rapture within the confines of the Covenant. When Universo attacked earth, Malcolm – along with his sister Angel and a few other kids – was rescued by the superhero SoulStar and his companions and escaped into Dimension-X.

The group constantly had to fight aliens and monsters and eventually, Malcolm and the kids were separated from the grown-ups and Malcolm’s sister Angel. It took Malcolm several years to find a way to leave Dimension-X but when he discovered Glum’s home planet it was Glum himself who teleported the kids to the alternate earth Malcolm’s father Dragon lived on.

It was here that Malcolm was reunited with his father and step-sister and for the first time in his life, Malcolm had a real family – until Virus killed Dragon.

Malcolm and Angel find shelter with the Darling family – the family of the deceased Lt. Frank Darling who had originally discovered Dragon when he first appeared on earth. Although underaged, Malcolm starts helping the Chicago police force in their fight against the Vicious Circle and other villains. He starts going to high school and begins to date girls. Around this time Dragon contacts Malcolm and lets him know he is still alive and well with the Krylans.

Eventually, Dragon returns to earth and is arrested. Through the years Malcolm keeps visiting his father in prison. He starts dating Maxine, a friend of his step-sister Angel and upon finishing high school the young couple gets married. In a foursome with his wife, his step-sister and an ex-date Malcolm impregnates all three women which ultimately leads to Malcolm and Maxine raising three kids.

Dragon is pardoned by President Obama and released from prison. When Mr. Glum messes around with alternate realities DarkLord had originally created the time-travelling despot attacks earth to destroy the reality Glum made. In an attempt to help his son, Dragon injects himself with Malcolm’s blood and regains his powers. He fights and defeats DarkLord but has to pay the ultimate price: before anyone can help him the blood transfusion kills the Savage Dragon…

The comic is set in real time, which means that characters age and die and the book often reacts to real-life events like certain movies, presidential elections or sports finales.